Cocoa visits her family, in the mountains, after quite some time again after her sister Mocha wrote her, through a letter, to come back soon. Her friends will have to spend a week in the town without her, while Cocoa has time with her family that she hasn't seen for a long time. But Chino, Cocoa's self proclaimed little sister, wants to go watch, with Cocoa and all her friends, the fireworks in the fireworks festival, which is coming up in less than a week. Cocoa decides to return early as she misses them all, but will she arrive in time for the climax of the festival?

Cocoa leaves town to visit her family for a week and worries about being separated from the others. She settles in back home readily, and back at Rabbit House, Chino finds it difficult to adjust to life in Cocoa’s absence, making a large number of iced cocoas. When Megu and Maya come to visit, Rize decides to put Chino, Maya and Megu to work cleaning Rabbit House up. Chino recalls how she first met Rize: although she was initially intimidated by Rize’s disciplined, serious demeanour, Chino eventually warmed up to Rize as a reliable employee and friend. Back in the present, the girls finish cleaning up Rabbit House, and Rize gives them schedules to keep busy. After shopping, Chiya and Sharo run into Rize, who is feeling a little down about being too hard on Maya and Megu. The next day, things become lively for Chino once again when Maya, Megu, Chiya and Sharo drop by to visit; when Chino tells the story of how Rize hand-made her stuffed rabbit, the others ask Rize for their own, and embarrassed, Rize expresses that she wants Cocoa back. Chino later asks the others if they’re interested in visiting the local summer festival to watch the fireworks with her, and gets an overwhelmingly positive response. Back home, Cocoa helps Mocha and their mother out with the day-to-day operations of a bakery. With things going smoothly, Mocha and Cocoa set off to make a delivery in town. Mocha reveals that she has a moped license, upstaging Cocoa, and the two head into town together. The two sisters take time to catch up with one another, and it turns out that Cocoa’s having difficulty picking a career out. After teasing Cocoa, Mocha finds Cocoa giving her the cold shoulder, but this does not last long: the breakfast rush has begun. When their mother takes off for a local clinic get her wrist checked out, Mocha and Cocoa manage to keep things in check. That evening, the family look over the photos that Cocoa’s sent. At Rabbit House, Chiya reveals that she’s brought yukata for everyone ahead of the summer festival, and it turns out that Rize ended up making stuffed rabbits for everyone. A week passes in no time at all, and on the day she’s set to head back, she nearly oversleeps. On her way back to the bus station, Cocoa declares her intention to work in a career that lets her bring happiness to others. Cocoa arrives back in town by evening, reading one of Aoyama’s books. Chino and the others change into their yukata and head to the festival, where they partake in the various games and food stalls. Maya wonders how they’ll see the fireworks, and Chiya remarks that she knows a place. Cocoa makes it just as the fireworks begin, surprising everyone, and the girls enjoy the performance together. Cocoa is glad that she was able to make it in time and after she takes a photograph of everyone, Chino welcomes Cocoa back. In the post-credits scene, Chino gives Cocoa her very own hand-made stuffed rabbit that Rize had made.

By order of appearances.

Is the Order a Rabbit? Special Episode: ~Dear My Sister~/Gallery 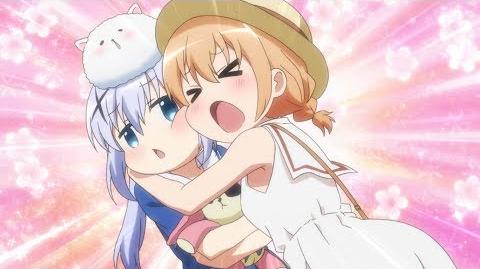 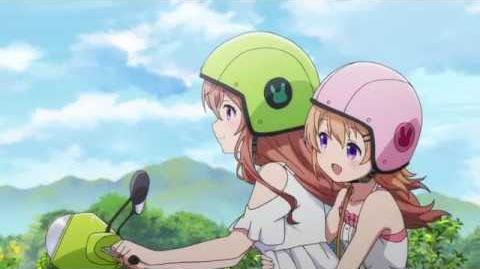 Retrieved from "https://gochiusa.fandom.com/wiki/Is_the_Order_a_Rabbit%3F%3F_~Dear_My_Sister~?oldid=11505"
Community content is available under CC-BY-SA unless otherwise noted.